Samsung had started sending out approval emails to customers who took advantage of the manufacturer’s promotion offering a free Gear VR with the purchase of a Samsung Galaxy S7 or S7 edge. From the feedback, there are indeed many people getting a free VR when purchased the S7 or S7 Edge.

.mp4 .m4v .3gp .3g2 .ts .webm .mkv .wmv .asf .avi .flv. In our opinion, .mkv is best, while audio is aac. Only audio which Android standardly supports work and that is AAC and MP3. AC3 and DTS were removed because of high licensing costs.

If you find your movie to be not in the right format, you can download?video converter program to convert your moviefile for Gear VR playback via S7/S7 Edge. I have personally used aPubsoft Video Converter, and am still amazed at how well it performs for a freemium program.

When you make sure your 3D video is supported by Gear VR, you can transfer the 3D videos to Galaxy S7 or Galaxy S7 Edge to view on Gear VR. There are some steps below to teach you how to enjoy 3D movies on Gear VR via S7/S7 Edge successfully.

On a PC, your S7/S7 Edge’s storage can be accessed from Windows Explorer by simply plugging in the USB data/charging cable – no software is required. On a Mac, files can be transferred to your phone using Android File Transfer (https://www.android.com/filetransfer/), which is a free utility provided by Google.

When downloading 3D movies, you’ll notice that they come in either Side-by-Side (SBS) format, which comes in Full SBS and Half SBS, or Over/Under (or Top/Bottom) format. For the non-techie people, they refer to the resolution of the movies and the way the two frames are separated (vertically for the former and horizontally for the latter).

The Gear VR automatically assumes that all files in the “3D” folder are in the SBS format. If you have a movie in Over/Under format, you must create a text file to have it correctly read. Simply copy and paste the following to Notepad and save it in the EXACT name of the movie:

Yes, the quotes are included. So, Over/Under movies in your 3D movies folder should have two accompanying files: the .png file for the poster image (assuming you got one) and the aforementioned text file.

Except for that last part which borders on the technical side, watching movies on your Gear VR is a simple matter. All you really need to do is copy your movies in the correct folder and you’re good to go.

Just like we said above, the perfect compatible 3D for Gear VR is SBS MKV and MP4. So if you have some 3D movies download from YIFY, YouTube, forfree3d.com, 3dmoviesstreaming.com or you have some 3D Blu-ray, DVD and want to view these videos on Gear VR via Galaxy S7/S7 Edge, you can use a video transcoder to re-encode videos to 3D SBS for Gear VR.

We aforementioned that we love to use aPubsoft Video Converter to convert unsupported video to 3D SBS MP4/MKV for Gear VR. Because it can convert any 4K/SD/HD video, TV shows and music dramas to 3D SBS video for Gear VR viewing on S7/S7 Edge. It offers three kinds of 3D effect: SBS, TB and Anaglyph and can switch 3D effect to another. It can transfer AC3/DTS audio to AAC/MP3 audio file accepted by Gear VR software without quality loss.

Click on “Profile” bar and find “3D Video”, there are a lot of format options for you. “MP4 Side-by-Side 3D Video (*.mp4)” is recommended for Samsung Gear VR.Or you can choose 3D SBS MKV for Gear VR playing with Galaxy S7/S7 Edge. 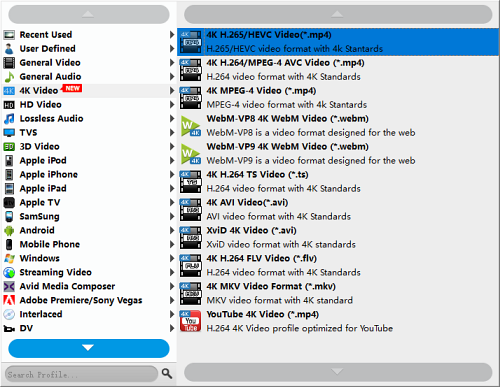 We also recommend using a higher bit rate than a typical web stream at that resolution, as the pixels in your video will be magnified on the phone’s screen. The optimal bit rate is content dependent, and many videos can get by with less, but 5 Mb/s should give good quality.

You can click “Settings” near the “Profile” to adjust the video resolution and bitrate to get more compatible format with Gear VR.

After the video to 3D MP4/MKV conversion finished, click “Open Foler” button to locate the 3D SBS .mp4 or .mkv files. Then, setup your Gear VR and put the generated SBS 3D MP4/MKV video files in the “MyVideos’ folder miscroSD of VR Gear and start your theatric 3D experience at home!

Tip: If you’re planning to rip Blu-ray/DVD to VR on Windows 10/8/7 PC, you can get help from an all-in-one tool aPubsoft Blu-Ray/DVD Ripper.

aPubsoft Video Converter Ultimate offers one-stop solution for any media downloading and converting tasks. You can convert any DVD to MP4, DVD to FLV, DVD to MKV, DVD to MOV, DVD to AVI, DVD to WMV and more, convert any 4K Ultra videos (4K H.265/HEVC Video(*.mp4) /4K H.264 FLV Video (*.flv)) to 4K /1080p HD video and other your needed format like MTS, TS, MP4, AVI, MOV, M4V, WMV, MKV, FLV and more. It has the ability to download online videos like YouTube videos/music and more.